So I was gone for the last week on a mini-vacation. Well needed and wonderful. While I was out there, it hit the “14 days past ovulation mark”— SOOO I tested with one of those Dollar Store cheepies. NOTHING! I was pretty saddened, so i went back to bed. I woke up at hour later to pee again, and I took a look at the test still sitting on the sink, and there she was — the faintest of faint pink lines. I mean,….you had to almost bend the light to get it that way.

Part of me was beyond excited. i felt pregnant. I had all the symptoms, my temps were still up, my chest makes me want to cry every time i take on an off a bra, I’m border liked psychotic I am so emotional the last couple of days. Sot hey said , “give it another day it will get darker”— for three days now I have been getting nothing but faint faint lines!

Yesterday I turned 15 days after ovulation, and I was a day late on my Aunt Flo. So I took a First Response Early Response and BAMB, super faint positive in like, 10 minutes. Then I took a blue dye equate brand, and got another faint positive. Then I took another 88Cent one from Walmart, which actually wasn’t faint at all, it was red! I could even take a picture of it! 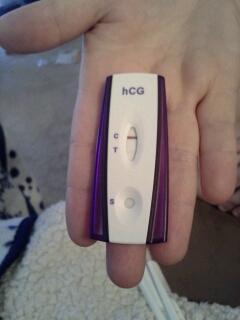 There really is a second line there, or am I imagining it?

So I am pretty excited. I took 3 tests, mid day all faint positives that showed up in less than 30 mintues. So I’m thinking…its going to keep getting darker right?

I woke up today, peed on TWO sticks. One was digital and said “not pregnant” (although the test recommend not taking it less then 19 days AFTER you ovulated and im on 16) And then another blue dye test…which showed up the faintest of faint lines….even fainter then yesterdays!!

So I went back and CRIED. I called my OBGYN office to tell them what was going on, they told me it was “too early to test” being only 2 days late, and sometimes faint lines will appear and produce false positives? one three tests though?! actually, in the last week i have had 5 tests, 4 differnt brands, ALL super faint positives.

So why is it not getting darker, or showing up within a minute or two? Is this a chemical pregnancy? did I just not ovulate 16 days ago like I thought? Maybe It didn’t “implant” until a week ago?

I’m just scared and frightened. I had a Positive OPK on June 8th, I had a temperature dip on June 9th, and a Temp spike on june 10th. It’s not June 25, and I’m just seeing the faintest of faint lines, AFTER a half hour passes 😦

Do you think it is still too early? I guess I am technically 15 days after a temp spike…. But I hear about all these ladies who get a bright positive at 10 days after ovulation, and it only gets darker from there.

I feel like I’m crazy. I have showed my husband all these tests too, and he has horrible eyes and has even seen the two lines…..

2 thoughts on “I need advice!”